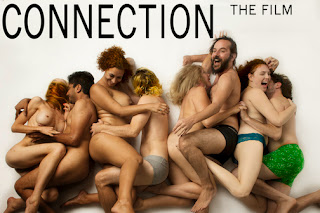 So this is the first post to my blog about the journey to make my new film, "Connection". Why, how, where, when, with whom, etc., etc. And it will be linked to my "A Filmmaker's Life" blog because, let's face it, this will be my life for awhile.

"Connection"is about swingers. Well, specifically, it takes us through a single night at a lifestyle (swinger) party as seen through the eyes of Benjamin and Melissa Hughes - who are exploring it for the first time.

The idea formed a few years ago when I met my first swingers and found myself compelled by their stories, beliefs and choices. Not for me, per se, but as a psychological, sociological and sexual phenomenon. But it indeed had me questioning my own choices and my own thoughts about relationships - especially having recently (at the time) ended a 15-year marriage.

The journey started in earnest a little less than a year ago when I decided I had to make my next film. Now. I had many ideas bouncing around in my head but this is the one that stuck with me.

Why? Because, as I said, I'm fascinated by it. Not just swingers, but the whole open lifestyle thing (they are not synonymous, in case you didn't know that, but we'll get into that eventually....). In general, I'm a student of human relationships (as are many filmmakers) and have a never-ending curiosity about how we relate to each other in the most intimate ways.

But I also wanted to further explore the aesthetic I used for my short film "Transaction"- which explored a very different sexual dynamic (a call girl and a client) in a very specific way. The film did very well out in the world and I was often asked if I had a feature in mind. No, did not see a feature emerging out of that particular dynamic. But a saw clearly how I could apply that cinematic approach to a film set in this dynamic.

That's it, for now. Starting slow. Much more to come. Curious to know what your immediate thoughts are when you first hear that I (or anyone) is making a film about swingers....

The Sexiest And/Or Most Sexually Provocative Films Ever. What do you think they are?
posted 12/10/2013